What’s Next for Energy Storage

ESS, or Energy Storage Solutions, have been on the rise globally, making headlines due to rapidly falling battery prices. When we previously covered energy storage for solar, one of our final points was that cost and state/federal regulations would be the two biggest factors in determining the velocity of implementation. In this article, we will sort through the numbers to illustrate the trajectory of solar plus storage implementation in the US, and showcase states that are proving to be examples of forward-thinking storage legislation.

Storage Implementation In The US

According to research from the University of Michigan: “As of June 2018, the U.S. had over 25.2 GW of rated power in comparison to 1,082 GW of installed generation capacity. Globally, installed energy storage totaled 175.8 GW.”. The same article states that around 2.5% of electric power delivered in the U.S. has been cycled through some form of storage facility. To provide perspective, Europe sees around 10% of its power delivered from storage facilities. 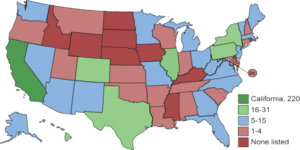 Which States will Lead the Market Next?

Energy storage is already being steadily adopted in states like California and Texas, but the next stage of this push could be led by the Northeast. In recent months, states like New York and Massachusetts have passed policies to encourage energy storage development in addition to solar and other renewables.

Massachusetts seems poised to take lead after passing the Solar Massachusetts Renewable Target (SMART) incentive, paying customers for every kilowatt-hour produced, with an additional premium for paired storage capacity. While most larger storage projects are still at an early stage of development, many smaller systems have already been installed. While not a direct indicator of future potential, SMART interconnection numbers already include over 130 MW of storage interest.

Meanwhile, New York has been working to move forward with its Reforming the Energy Vision program. More importantly however for the storage market has been the massive wave of funding, including the $20 million ACES program, to jump-start projects and bring down costs.

This “bridge incentive”, which was designed to help companies monetize the value of storage from which they can’t yet receive compensation. By supporting early growth, the incentive should help the market reach a healthy size, before phasing out as installations grow.

If successful, this funding could result in an estimated 1.8 gigawatt-hours of energy storage by 2025, and push New York to the forefront of the energy storage market, perhaps becoming an example for other states to follow in the future.

Energy Storage comes in many forms. SCF is primarily interested in behind-the-meter applications that are aiming to provide “demand shaving” (lowering a customer’s peak demand load), or provide the ability for non-exporting of electricity in states like Hawaii where this is not allowed. The majority of projects that SCF has reviewed are in the 500 kWh-2 MWh range.

If you have solar + storage projects that you are looking to finance, please send us the details and one of our team will be in touch to discuss.